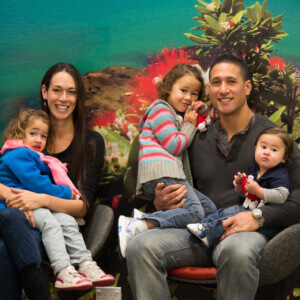 When Joseph Heke (Ngapuhi/Ngati Hineuru) started dating his girlfriend Melissa (Ngati Maniapoto) in 2007, it not only led him on a path towards becoming a husband and father, but also put him on a path to saving lives.

Melissa convinced him to become a blood donor early on in their relationship as she had been a regular donor since giving at high school. She had seen the process at a young age whilst going with her Mum to regularly donate blood and knew that when she was old enough that she wanted to save lives in this way as well.

After becoming a blood donor Joseph was approached by the nurses during one of his donations and signed up to join the New Zealand Bone Marrow Donor Registry (NZBMDR) after learning that Māori donors were sought after for the Registry (to find out why see page 11). In January 2013 Joseph was at work when he was contacted by NZBMDR. A patient overseas was in need of a bone marrow transplant and his records indicated that he could be a possible match.

I didn’t think I’d ever be a match for somebody but they asked me to come in so they could get a couple of tubes of blood to test. Then a few days later I got a phone call saying I was a suitable match for the patient and was asked if I would donate my bone marrow.

Joseph felt no hesitation to agree and Melissa said she had no doubts that if it was needed that he should give, as she was also on the Registry and understood the importance of it. Joseph was put on a course of a medication called G-CSF to increase the number of stem cells circulating in the blood stream. He was so determined to make sure he was fit and healthy before he donated his bone marrow that he even lost four kilograms by exercising and eating well before his donation date!

In February 2013, Joseph donated his bone marrow at the Epsom Donor Centre through a Peripheral Blood Stem Cell Donation, a similar process to apheresis donations where blood is taken and spun down in a centrifuge, the components needed (stem cells) removed and the rest returned to the donor. The whole donation took approximately four hours and Joseph had his support crew, in the form of his three children and wife Melissa, join him for the last 40 minutes. He returned to work two days later with only minimal bruising from where the needle was.

Joseph and his wife Melissa firmly believe ‘If you can donate, give’ and between them have now saved over 100 lives in New Zealand, along with one person overseas with their generous donations.

The couple have three children who will one day hopefully follow in their parent’s footsteps and become blood donors as well as join NZBMDR.

Seeing her mum donate was where it all started for Mel and that’s why we take our kids to see it happen now, so when they grow up, they’ll know it saves lives and it’s not painful and scary.

NZBMDR still requires donors who have Māori, Pacific Island or any other ethnic minority to join the Registry.