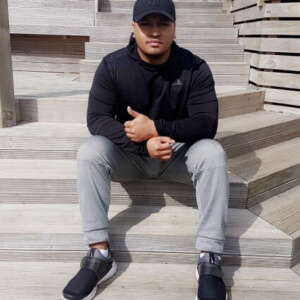 Pharoah had never been seriously ill before – always healthy and an avid gym enthusiast.

It was during a workout that a non-stop nose bleed led him to seek medical help.

It all started in May 2017 when Pharoah suddenly began feeling very tired and lethargic, characteristics that weren’t part of his norm as a young and healthy 23-year-old. The odd symptoms triggered a sign of alarm after the non-stop nose bleed and prompted a visit to the hospital where he was diagnosed with a rare condition called Aplastic Anaemia. His body had stopped producing enough new blood cells and he’d need a bone marrow transplant as soon as possible.

The first step was to decipher if a fellow family member was a match for Pharoah. Because tissue types are inherited, it is common for the donor/recipient to be of the same ethnicity and most likely to match someone of the same bloodline. Unfortunately, there was no family match for Pharoah, but luckily in addition to the wide array of lifesaving services that New Zealand Blood Service (NZBS) provides, it also hosts the New Zealand Bone Marrow Donor Registry (NZBMDR), the registry responsible for matching unrelated volunteer donors for NZ patients who require a bone marrow transplant and do not have a suitable family donor, as was the case for Pharoah in his time of need.

“I remember going to the gym and feeling tired but shrugged it off, until it got worse and worse”, says Pharoah. “I remember that nose bleed went on for about two or three hours, I had to hold a towel over it! I finally decided to go to the hospital and that’s when I was diagnosed.”

Due to Pharoah’s ethnicity and the low representation of non-European ancestry donors on the registry, he was faced against all odds. He was in and out of hospital for seven months before a match was found – luckily, thanks to one donor with Pacific Islander heritage and the NZBMDR, there was a sign of hope for Pharoah and his loved ones.

“Before the transplant, I was in and out of the hospital for months. There were a couple of times where I wasn’t sure if I would make it out alive and they were hands down the scariest and hardest times of this entire journey. Not just for me but for my family too.”

Prior to receiving the transplant, Pharoah suffered from sceptic shock and spent a fair amount of time in the intensive care unit in an induced coma while the doctors worked tirelessly to nurse his body back to a functioning state, all whilst waiting for a match to be found.

“I was incredibly lucky to ever wake up from that, unfortunately after that my body was spent. It got weaker and weaker and eventually led to internal bleeding that wouldn’t stop. I was given blood and platelets every day at that point to try and replace the blood that I was losing, but it wasn’t working. This was the second time I had to fight the light. I was sent to an emergency procedure when I suddenly couldn’t breathe properly. Yet again, I was blessed to come out from that.”

“I remember I couldn’t even walk when I got out of the hospital the first few times, couldn’t even move my arms, and now it’s just so different. Shortly after undergoing the bone marrow transplant procedure I started regaining my strength, by the third or fourth day”, says Pharoah.

“After all this, I feel so much better and it’s all thanks to the kind and giving people who donated for a stranger in need.”

Since the procedure Pharoah is now back to his healthy self and even took this second chance at life to propose to his girlfriend – he says not a moment is wasted moving forward. However, Pharoah is not a unique case in that NZBMDR is constantly recruiting males with Maori or Pacific Island ancestry and males with an ancestor from any NZ ethnic minority group to better the odds for a recipient in need. Since this life changing event, Pharoah can’t express enough how much he encourages fellow Pacific Islanders to donate as his life was saved thanks to both bone marrow and blood donors.

“I think it’s great to donate, especially for us Pacific Islanders. I’m really thankful for the donors whose bone marrow and blood I received – not a moment of my life is taken for granted anymore and I owe it all to them.”