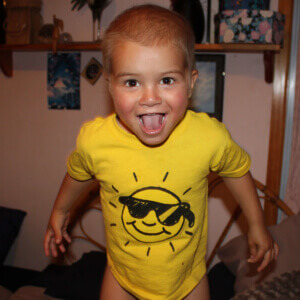 On 17 March 2009 a wonderful, loving, cheeky and caring little boy called Chace Eriki Topperwien was born to first-time parents Ryan and Keri. In November Chace came down with symptoms of the flu and developed bruising and red dots. He was referred to the A&E in Waikato where blood tests revealed low platelets, he was initially diagnosed with a possible blood disorder.

Three days before his first birthday, Ryan and Keri Found out that a bone marrow aspirate had determined that Chace had a rare strain of Acute Myeloid Leukaemia (AML). He started four cycles of chemotherapy the next day.

Unfortunately the chemotherapy didn’t work as the cancer proved too strong, so Chace’s only option was a Bone Marrow Transplant. His parents went on a national campaign to try and find a match for Chace, but being of European and Maori (Tuhoe, Ngati Awa, Ngati Porou) descent made it difficult to find a bone marrow donor that matched his tissue type.

A cord blood was found in Australia which worked for approximately three and a half months but Chace relapsed and on 30 December 2011 Ryan and Keri were told that there were no more options available.

An opportunity for a drug trial in the UK brought some hope but was sadly unsuccessful.

The Dream Chaser Foundation was established by Ryan and Keri Topperwien in loving memory of their little boy Chace Eriki Topperwien. Their goals are to support children and their families facing childhood cancer and to raise awareness of bone marrow donors.